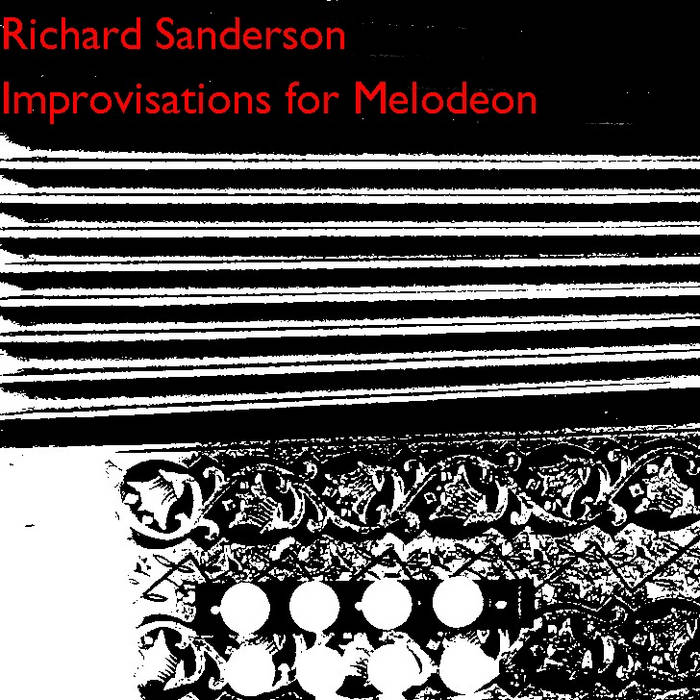 Real time improvisations for solo melodeon (diatonic button accordion) both acoustic and with amplification and electronics.


The melodeon is a curious instrument for free improvisation, it’s determinedly tonal, each button plays two different notes depending on whether the bellows are being pulled or pushed, and it’s a bugger to amplify. That said it also has its likeable quirks- the clattery keys, the way the notes “beat” against themselves, and it has a nice noisy air button.

I’d been planning a solo melodeon album for a while, and these recordings capture my three main approaches. Some tracks are entirely acoustic, albeit with occasional additions like bells, a music box mechanism and a dictaphone. On others the melodeon is fed live through computer software (Audiomulch), radically altering the sound. The remaining tracks use the set up I employ for live performances with foot-pedals and amplification.


Richard Sanderson is an improvising musician based in London, he has recorded with the groups Ticklish (with Phil Durrant, Kev Hopper and Rob Flint), Minnow (with Kelsey Michael, John Edwards, Mark Sanders, Gail Brand and others) and in duos with Mark Spybey and Steve Beresford. He has recorded for several labels including Grob, Textile, Qbico, Lens and Duophonic. He has performed at festivals of experimental music in London, Austria, Denmark, France, Germany and Holland.
He also dances and plays with Blackheath Morris Men.

REVIEWS-
A melodeon is a diatonic button accordion, in case you were wondering about that, and its played here by Richard Sanderson. He is a member of Ticklish, Minnow and has duos with Mark Spybey and Steve Beresford. As the title suggests these are works of improvisation. There are three approaches to playing the melodeon here: entirely acoustic, sometimes with the addition of bells, music box and a dictaphone. Secondly by feeding it through computer software (Audiomulch) and live playing using foot-pedals and amplification. This variety is shown on this album. Indeed all three varieties are shown here and make some remarkable music. 'Parsec' sounds like curious mixture of microsound and improvisation, followed by 'Five Small Stones' and 'Desorbering', which sound like full on, careful improvisations. Field recordings, played through the dictaphone perhaps, slip through on 'Bottle City'. There is even some mild noise explosions in 'December Valves'. See, not a disc about one thing, but about many things, and this variety holds up for the entire length of the disc of an hour. Quite exciting for its entire duration. (Frans de Waard - Vital Weekly)

UK improviser Richard Sanderson is also a broadcaster for Resonance FM (Little Atoms) and I welcome his bluff, no-nonsense remarks whenever we bump into each other at the studio. He released his second solo record Improvisations for Melodeon (LINEAR OBSESSIONAL RECORDINGS LOR002) in May 2011, a fine collection of music and sounds produced with this squeezebox-type instrument more often associated with English folk music, and which he has sometimes used to accompany his sea-shanty-like songs with their offbeat lyrics. No songs on this solo release, though – it’s a showcase of varied approaches to music production, reflecting for example his live setup with foot pedals and amplification, or those tracks where he pushes the sound through a computer programme called Audiomulch which mangles it into a species of low-grade electroacoustic murk, with results that are somewhat like witnessing a phantom apparition of John Kirkpatrick adrift in a never-never land somewhere above the IRCAM studios. Sanderson also has his own idiosyncratic approach to the “prepared instrument” methodology (John Cage via Keith Tippett), adding bells, shells, the windup mechanism from a music-box, and a dictaphone to his impedimenta. In contrast to what some critics regard as the typically English approach to improv, i.e. hyper-fast and full of twitchy space-filling notes, this release is slow, creaky, wheezy and in places the music resembles the movements of a guttering candle flame. It’s also very sonically rich, and I feel sure that if so inclined the very talented Mr Sanderson could find a home among the international EAI jet-set. Limited edition, of which the cover is a black and white photocopy enhanced with coloured gel overlays; the box is packed with cryptic conceptual-art inserts, including a fragment of a London street map and a page from a summary log of space launches. The whole release has the attention to detail and English quirkiness that we used to get with Recommended Records, The Remote Viewers, or The 49 Americans, all now nearly vanished manifestations of a 1980s radicalism that is somewhat lacking today. (Ed Pinsent - The Sound Projector)

All tracks recorded in Hither Green, South East London, Autumn 2010 to Spring 2011 by Richard Sanderson.
All tracks were recorded live with no overdubbing. Post-production consisted of some EQing and noise reduction.

You may also be interested in Richard Sanderson's album of electronic music "Steady States" available for "name your price (including 0 Euros) from the Three Legs Duck Netlabel threelegsduck.bandcamp.com

Richard Sanderson is an improvising musician based in London, he has recorded with the groups Ticklish, Minnow, Lost Robots and in duos with Mark Spybey and Steve Beresford. He has recorded for several labels including Grob, Textile, Qbico, Lens and Duophonic. He has performed at festivals of experimental throughout Europe.

He is the curator of Linear Obsessional Recordings. ... more

Bandcamp Daily  your guide to the world of Bandcamp

YUNGMORPHEUS introduces his latest project, plus jams from Michael Sneed and Navy Blue